So you’ve been playing guitar for a couple years now, and you’ve got all the basic techniques down.  Bar chords are no problem, you can solo with the major and minor pentatonic and blues scales, and maybe you’ve even gotten into learning some 7th chords or rootless voicings.  Now the question becomes: do you know what you’re playing and why you’re playing it?  This is where music theory comes into the equation.  If you want to better understand chord makeups, chord progressions, and what scales and melodies can work over them, then you have to start to understand at least the basics of music theory.  Applying what you learn from theory can open up new worlds of possibility in your playing and composing, and can really help spur on some periods of creativity and inventiveness.  However, tackling these concepts immediately on the guitar can prove a daunting task because of how string instruments are constructed, so I recommend learning some basic piano.

But I’m a guitar player you say!  Why should I learn piano?  Well, piano really is the ultimate theory and composition instrument because of how logically it’s laid out for you.  (Disclaimer: If you haven’t done so already, you’re going to want to learn how to read notes on the guitar so that translating what you learn on the piano to the guitar won’t be so difficult.  I personally recommend starting with Mel Bay’s Modern Guitar Method: Grade 1, and then moving onto Berklee Press: A Modern Method for Guitar, Volume 1.) Even getting through just the first half of one of these books with a good teacher should at least give you the foundation to figure out how to translate notes from the piano to the guitar.  For example, you might see something as follows when you first begin learning theory, and if you don’t know the notes on the treble clef it’s almost impossible to understand.  It explains the order of half steps and whole steps which constitutes the major scale in any key.

Now the reason that piano works so much better as an avenue for learning music theory is because there is only one key for each note.  On Piano the C above middle C is always a single key.  On guitar you can play the C above middle C as, 1st fret-B string, 5th fret-G string, 10th fret-D string, 15th fret-A string, and 20th fret-Low E string.  These are all literally the same note; not octaves of each other!  Understanding how to play in all of these positions on guitar becomes easier as time goes on, but you can see how it may be a little confusing in the beginning.

Because each note is only one key on the piano, you can physically see the distance of all of the intervals.  Learning intervals is the foundation for all of the music theory to come, so this is a huge advantage in the beginning.  Now, intervals will be easy enough to see on guitar if you stick to one string, because each fret you move up or down represents a half step. This is the same as moving from one key to the key directly next to it, whether black or white, on the piano.  However, it is moving across strings which becomes difficult in learning theory on the guitar.

Guitar’s main limitation in playing chords is that only one note can be sounded per string, so it’s a little harder to come up with workable voicings.  Each string is like a keyboard in and of itself on guitar.  As you move to higher strings, it’s like changing to a keyboard which starts at a higher note than the one before.  So once you understand your intervals on piano, you can then translate that knowledge to how the strings relate to each other on guitar.  Here are the notes of each open string on the guitar laid out on treble clef with TAB (Note: Guitar music is written an octave higher so that all the notes fit on treble clef.  What is written as middle C in guitar music is actually the C below middle C). 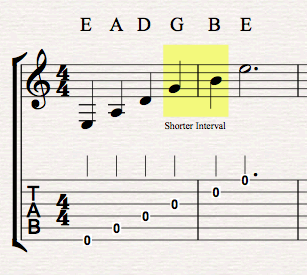 You can see that the space between each note is the same except between the G and B strings.  The guitar is arranged in perfect 4ths, except between the G and B strings, which is a major 3rd.  This is another aspect of guitar that makes sense from a functionality standpoint (open chords and barre chords would be almost impossible to play if it were the same interval), but it complicates things when trying to understand the guitar theoretically.

The final reason for learning piano is from a composer’s perspective.  The piano spans the entire range of an orchestra or band, and then some.  On piano you can play 8-10 notes at one time whereas guitar is limited to 6 at the maximum.  You can play supporting chords and melody to hear the complete picture of a song much easier than if you were to try to arrange a chord melody on guitar.  Now all this talk about piano is not to say that it is somehow a superior instrument; just that it’s functionality lends itself better towards a complete understanding of music theory and composition.  We obviously still love our 6-string for it’s expressiveness and ability to bend and slide notes.  Hope this gets you on your way to becoming a more well-rounded musician, and has maybe inspired you to start learning some piano and theory as a guitar player.